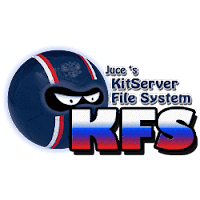 In the Kitserver 6 program there are several modules with different functions including the following.

Kserv Module: The earliest module of Kitserver 6, Kserv module is also one of the reasons which of the name "Kitserver". Kserv Module offers an alternative to managing player kits & goalkeepers outside of AFS files. By using Kserv module you will be able to add various types of kits, not just the kit away and home alone for each team.

BallServer Module: Just like KServe Module, this module allows PES 6 users to add as many balls as possible. Not to mention the BallServer module already supports some textures such as 256x256, 512x512 to 1024x1024.

Stage Server Module: One of the favorite modules among PES 6 users, using Stadium Server you will be able to add various stadium collections as much as possible.

Face Server Module: Well, if this is the function to update face & hair player. Just like Stadium Server, Ball Server and KServ Module, with Face Server you can add various face & hair as much as possible even if necessary you can replace the entire face of players in PES 6 (If strong instead hehe)

Boot Server: It feels incomplete if the player does not update the latest boots or shoes. Well with Boot Server module you can also add various boots into the game PES 6

1. Extract the rar file with WinRAR.

3. In kitserver folder, run setup.exe as administrator and choose your PES 6 executable file aka PES6.exe.

4. Click Install until showing a message "Kitserver Installed Correctly for This Folder"