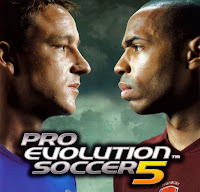 The biggest and the most complete patch for both titles is finally ready. After long and hard work on database it is finally ready to get downloaded on your hardisk. Patch contains more than any PES5/WE9LE patch before, it includes on some things that were unknown back then, such as relinking banners, chants and emblems.

Details and infos about the patch

So what actually makes this patch the most complete one yet ?

Well, to start from scratch - all teams have their full names written according to their language, more than 2000 faces are assigned to players and not only players - all the referees are replaced now to provide you new ones such as Howard Webb and so on. Almost every team in the game has their chants, here is the list of only ones that are missing:

Almost every team has kits for season 2011 and even those who don't are done with waterloo tool so they look at least similar to real ones), only few are missing and even them are being made at the moment and will be included in the update. Commentator is updated with new player callnames, 7 new national teams are added over classic teams and ML starting year is set to 2011. Every team has its own banner slot(relinked) and stadiums are assigned to teams via home map.txt

Notes : Option Files folders situated in the folder "of" in the game installation directory. It's must be copied into My Documents.

Note : If you prefer WE 9 LE version, you can download here.